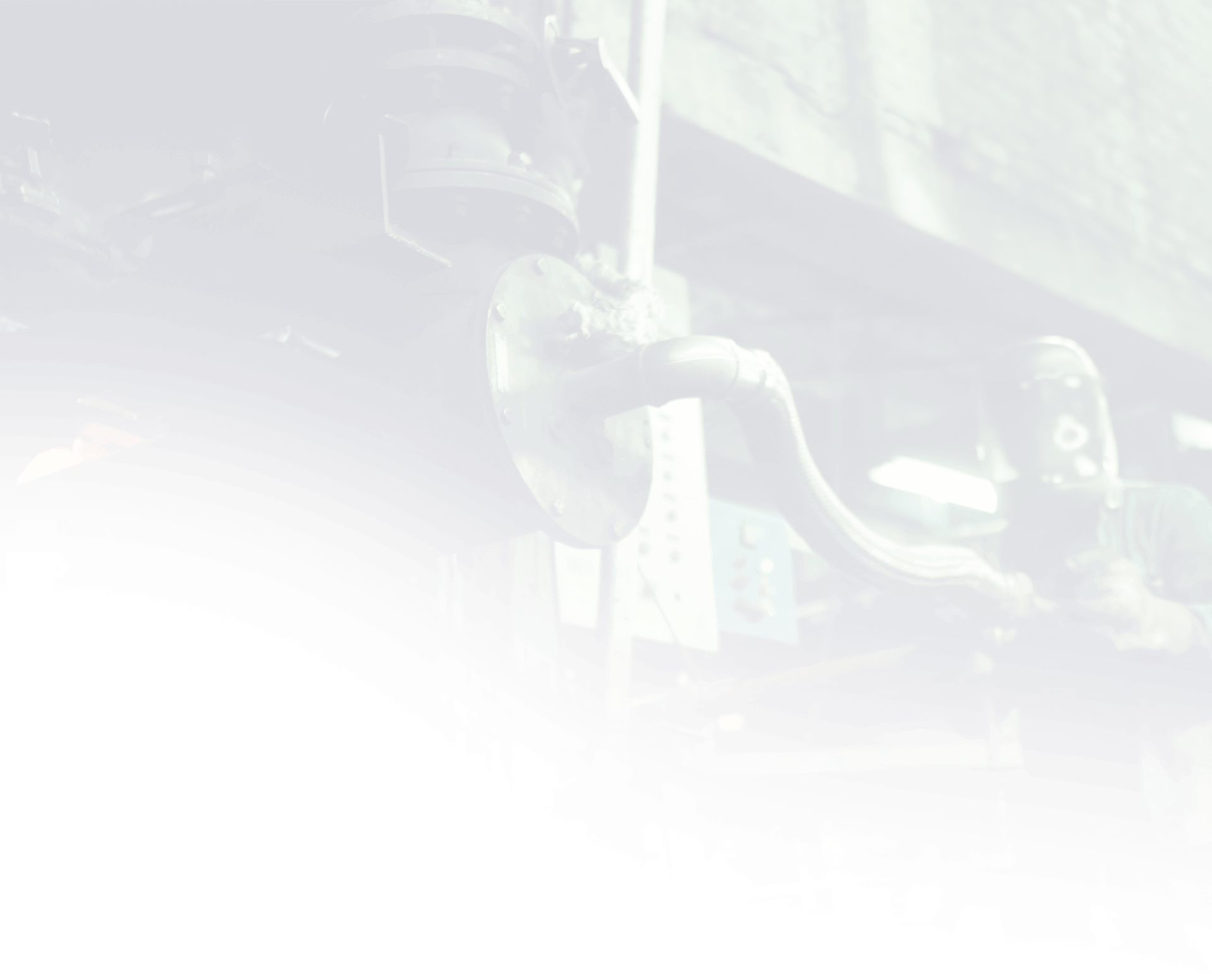 The rising cost of shipping everything from industrial -pump parts to lawn-mower batteries to living-room sofas is forcing some manufacturers to bring production back to North America and freeze plans to send even more work overseas.
"My cost of getting a shipping container here from China just keeps going up -- and I don't see any end in sight," says Claude Hayes, president of the retail heating division at DESA LLC. He says that cost has jumped about 15%, to about $5,300, since January and is set to increase again next month to $5,600. 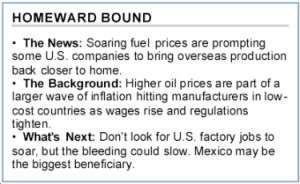 The privately held company, known for making the heaters that warm football players on the sidelines, recently moved most of its production back to Bowling Green, Ky., from China. Mr. Hayes says the company was lucky to have held onto its manufacturing machinery. "What looked like an albatross a year and a half ago," he says, "today looks like a pretty good asset."

The movement of factories to low-cost countries further and further away has been a bittersweet three-decade-long story for the U.S. economy, knocking workers out of good-paying manufacturing jobs even as it drove down the price of
goods for consumers. But, after exploding over the past 10 years, that march has been slowing.

The cost of shipping a standard, 40-foot container from Asia to the East Coast has already tripled since 2000 and will double again as oil prices head toward $200 a barrel, says Jeff Rubin, chief economist at CIBC World Markets in Toronto. He estimates transportation costs are now the equivalent of a 9% tariff on goods coming into U.S. ports, compared with the equivalent of only 3% when oil was selling for $20 a barrel in 2000.

"In a world of triple-digit oil prices, distance costs money," Mr. Rubin wrote in a recent report. He figures that for every 10% increase in the distance of a trip, energy costs rise 4.5%. Transportation costs are just part of a larger wave of inflation sweeping global manufacturing, which has also been pounded by higher costs for basic materials, such as steel and resins.

The cost of doing business in China in particular has grown steadily as workers there demand higher wages and the government enforces tougher environmental and other controls. China's currency has also appreciated against the dollar -- though not as much as some critics contend it should -- increasing the cost of its products in the U.S.

Edward Zaninelli, vice president of trans-Pacific westbound trade at Orient Overseas Container Lines in San Ramon, Calif., a major shipping line, says he's heard from customers who are moving production back to the U.S., including a maker of steel pans for car engines.

"I believe a decent amount of production could come back into the States within five years, not everything," he says. "But it won't be because of transport costs -- it'll be because other production costs have gone up and companies have realized they can have better control over their production when it's closer to home.

" For many manufacturers, though, oil prices that have hurtled past $130 a barrel have been the tipping point.

Emerson, the St. Louis-based maker of electrical equipment, recently shifted some production of items such as appliance motors from Asia to Mexico and the U.S., in part to offset rising transportation costs by being closer to customers in North America.

Edward Monser, the company's chief operating officer, says logistics costs, which include all the expenses associated with moving goods, became a worry about a year ago.

"That's when it became a dominant part of the discussion," he says, adding that oil then was less than $100 a barrel. "So with oil now at $130, it's even more serious." Mr. Monser says Emerson's larger strategy is to regionalize manufacturing, producing as much as possible within the part of the world where its sold.

But moving production closer to markets won't avoid all the problems associated with rising transportation costs. Manufacturers face hefty surcharges on domestic shipments by truck and train. And already congested domestic transportation systems may have difficulty handling a sudden upswing in demand from manufacturers buying and moving more raw materials and other supplies over U.S. rails and highways.
Moreover, in certain industries the advantages derived from offshore production continue to trump higher transportation costs. Electronics firms, for instance, are now clustered in Asia and gain a major benefit of proximity to one another. While many manufacturers are re-evaluating production strategies, there are limits to how many jobs will flow back to the U.S. One problem is that much of the basic infrastructure needed to support many industries -- such as suppliers who specialize in producing
parts or repairing machines -- has dwindled or disappeared. U.S. job losses in manufacturing have averaged 41,000 a month so far this year -- nearly double the pace last year, with sectors such as autos and construction materials tied to the housing slump especially hard hit. In essence, every job added as a result of companies pulling work back home is being more than offset by others reeling from the domestic slump.

Higher fuel costs "may slow the outsourcing of goods in the future, rather than causing a massive shift back of those things that have already been outsourced," says Daniel Meckstroth, an economist at the Manufacturers Alliance/MAPI, a public policy group in Arlington, Va.

A prime example is Craftmaster Furniture in Taylorsville, N.C. The company, bought two years ago by a Chinese manufacturer, once intended to shift 40% of its U.S. production to China by the end of this year or early next year. With the planned move only about half done, that exodus has stopped cold.

"We're getting hit with increases up and down the system," says Roy Kalcain, the company's president. "It's changing our whole equation for where we produce." As recently as a year ago, Mr. Kalcain says he was saving 15% when he assembled sofas in North Carolina using kits of fabric that were pre-cut in China. Those savings are now only 7% or 8%.

When savings fall to far less than 15%, it gets harder to justify having the work done in distant Chinese factories that take 12 weeks to deliver products.

The higher costs are particularly problematic for lower -value goods: The cheaper a product, the more significant transportation costs are in the final price. That may help explain why Chinese exports of such "freight-sensitive" goods to the U.S. are now falling for the first time in more than a decade, according to CIBC's Mr. Rubin.

Bremen Castings Inc., a family owned foundry in Bremen, Ind., is seeing a wave of customers bringing work back from China and other low-cost countries. Last month, a pump manufacturer, which had moved more than $1 million worth of metal-casting work from Bremen to China two years ago, called "to reactivate everything," says J.B. Brown, the foundry's president. "They told me the cost of transport from overseas was the straw that broke the camel's back -- and they said they didn't see it going back down any time soon."

And the heavier and bulkier goods are, the more sensitive they are to fuel costs. CIBC's Mr. Rubin predicts Mexico will be "the biggest winner of all" as increased transportation costs make China uncompetitive in an ever-growing list of businesses in North America. Even Mexico may be too far for some companies.

Last fall, Crown Battery Manufacturing Co. decided to close a plant it bought in Reynosa, Mexico, and move the jobs to its Ohio home base, adding 25 workers to the 400 it already employed.

Mr. Hawk estimates shipping to customers, who tend to be clustered in the Midwest, was adding 5% to 10% to the cost of the Mexican-made batteries, which he says also suffered from qualitycontrol problems. The smallest batteries are 20-pounders for lawnmowers, but they also make 29,000-pound giants for running underground mining machines in places like southern Illinois.

"They were traveling 2,000 miles to get to those major customers," says Mr. Hawk, and all indications are that fuel surcharges on the trucks would just keep growing.

-- Conor Dougherty
contributed to this article.

Hyperlinks in this Article:
(1) mailto:timothy.aeppel@wsj.com

Copyright 2008 Dow Jones & Company, Inc. All Rights Reserved
This copy is for your personal, non-commercial use only. Distribution and use of this material are governed by our
Subscriber Agreement and by copyright law. For non-personal use or to order multiple copies, please contact Dow Jones
Reprints at 1-800-843-0008 or visit www.djreprints.com.